I tried to resist, honestly. 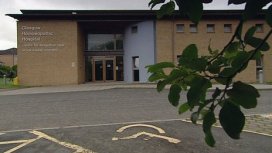 But having read the BBC News article Glasgow homeopathic hospital tipped to be pain centre on the train this morning reaching for the cathartic release of my red pen seemed the only option.

Scotland’s only homeopathic hospital may be about to become the country’s first
dedicated centre for chronic pain, the BBC understands.

Bearing in mind the shocking fall in homeopathic referrals, any port in a storm.

The Glasgow hospital’s future has been in doubt because of the controversial
nature of homeopathic medicine.

The controversy being of course that it doesn’t work and yet somehow cannot be eradicated from the NHS.

The vast majority of respondents said they wanted a Centre of Excellence in a
single location.

Sounds like a solid idea and I’m sure a centre of excellence next to a failing department for magic medicine would be an interesting juxtaposition.

Homeopathy involves treating people with highly diluted substances with the aim
of triggering the body’s own healing mechanisms.

“Aiming” to do that is about as far as homeopathy has actually got, because under properly controlled conditions it doesn’t have any specific effects. I cannot put enough quote marks around highly diluted so I won’t even try.

Medical scientists have said many trials have shown it is no better than a
placebo.

I just said that.

The BBC understands that the number of referrals to the Glasgow hospital has
fallen by two-thirds since several health boards withdrew funding for patients
to be treated there.

Indeed it has and bearing in mind that this is public money being squandered indulging peoples pseudoscientific belief systems this is a good thing. I’m sure no one in their right mind would think saving this failing hospital makes sense.

“I think it does make sense,” said journalist and former MSP Dorothy Grace Elder, who has spent many years campaigning for a Scottish centre for the treatment of chronic pain. It is the most beautiful hospital. If they took chronic pain patients hopefully that would be a double victory: a new residential pain centre in Scotland plus saving and maintaining that hospital.

Well I can’t argue that its a beautiful building. I guess laying in a bed looking at the nice garden could make you feel better all on its own……

The Homeopathic Hospital has recently attempted to distance itself from alternative medicine by renaming itself a “Centre for Integrative Care”.

I idly wonder if this attempt to distance itself from alternative medicine and to ‘diversify’ was associated with the fall in referrals. I also wonder whether the resident Homeopaths also quickly came round to the idea of being ‘complementary’ and not ‘alternative’.

Catherine Hughes went to the hospital as a “last resort” 20 years ago after developing severe reactions to drugs for a chronic illness. She said she wished she had gone there sooner. “The unit in many ways has been misrepresented as just being a homeopathic service when it offers the best of both worlds, both conventional and complimentary under one roof, with a full multidisciplinary staff,” she said.

The previous name ‘The Glasgow Homeopathic Hospital’ was a poor choice then. They misrepresented themselves.

Doctors at the hospital said it has always focused on holistic care rather than just homeopathy, and already treats a number of people with chronic pain. They said that, by refusing to refer patients, health boards were denying them access to specialists in physiotherapy, acupuncture and cognitive behavioural therapy.

Oh dear. The refusal to refer patients by Lothian and Highland health boards was, as I understood it specific to homeopathy after consultation was undertaken. I would however be interested in evidence that people had been denied say, physiotherapy, due to refusal to refer.

Ms Hughes welcomes the idea of the hospital becoming a centre for chronic pain patients too, providing that does not infringe on existing services. “I think that would be a very good thing as long as it was an integrated service,” she said. “So long that the pain centre didn’t just come in and take over.”

No dilution jokes please. This of course is the critical part, the lobbying for a pain centre is just a way of propping up the failing homeopathy service and with the on-going NHS Lanarkshire consultation on homeopathic referrals this situation is only going to get worse.

However, the Golden Jubilee Hospital in Clydebank is also lobbying to be the
home of Scotland’s new chronic pain centre.

One thought on “Glasgow Homeopathic Hospital Is Clutching at Straws”