I’ve not yet got round to reading The Big Fat Surprise by investigative reporter Nina Teicholz, but her recent tweets in support of her thesis (the claim that the science says that a healthy diet includes large amount of fats from butter, meat and cheese) have become increasingly bizarre.

Here is an example:

Which Minister of Health, below, has ditched low-fat diet for low-carb? Ansr: Sweden, #2! (#1 Belgium, #3 Quebec) pic.twitter.com/oNNY341b6e

Now, lets stop for a moment and think really hard about what she might be implying here.

Could it be that Teicholz knows in detail about the particular diets of these individuals (Maggie De Block, Belgium; Gabriel Wikström, Sweden and Gaetan Barrette, Quebec) and is implying that by observation alone we can see that one particular diet is the best for weight?

Even if that were true – and I can find no evidence to support the idea that Gabriel Wikström achieved or maintains his weight using LCHF – how does an uncontrolled observation based on three individuals with a multitude of other differences tell us anything about diet?

It also raises the ugly spectre of cherry picking – why were these particular members used as examples and not say the UK’s Jeremy Hunt, another country which hasn’t adopted low-carb dietary guidelines? 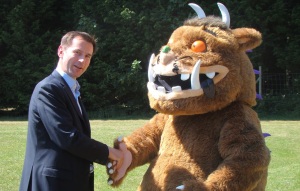 For the avoidance of confusion, Jeremy Hunt is the svelte chap on the left. No, the use of Health Ministers implies something else…….

Could it be then, that Teicholz is implying that you cannot be a health minister on merit, if your BMI isn’t acceptable?

Hmm, while there may be an element of offensive fat shaming involved, I think her further tweet eludes to her real meaning:

.@raptros_ Swedish government is the first Western country to formally ditch the low-fat diet. They reviewed the science.

Teicholz seems to be implying that the health ministers are in some way the physical manifestation of the success of the dietary policies of the nations or province.

Aside from the fundamental daftness of this idea, and the fact that the Swedish Council on Health Technology Assessment was only written just over a year ago (thus having limited time to effect the health of an entire nation), she gets fundamental facts about it totally and utterly wrong.

It is not a Government Report or set of consumer guidelines, it is a Swedish Council on Health Technology Assessment.  This report has been misrepresented so much that Swedish National Food Agency even took the step of clarifying this matter:

Has this investigative reporter heard of Google? Did she not think it weird that no-one has actually produced this set of paradigm shifting guidelines?

Also I cannot see how the report itself can be interpreted by Teicholz, or anyone to mean the Swedish Government is the first to:

I mean even with just the press release in English it seems pretty clear to me that the report states that Low Carb is the best for short term weight loss (<6 months), but is one of a number of comparable options for longer term weight loss which includes low fat and Mediterranean diets:-

In the short term (six months), advice on strict or moderate low carbohydrate diets is a more effective means of achieving weight loss than advice on low fat diets. In the long term, there are no differences in the effect on weight loss between advice on strict and moderate low carbohydrate diets, low fat diets, high protein diets, Mediterranean diets, diets aimed at achieving a low glycaemic load or diets containing a high percentage of monounsaturated fats.

Further the only diet for weight maintenance with sufficient evidence is low fat, in preference to either LC or Mediterranean:

Maintaining reduced weight. When obese individuals have lost weight, they can maintain their weight more effectively with advice on low fat diets with a low glycaemic index and/or high protein content rather than low fat diets with a high glycaemic index and/or low protein content. There is no data available to assess whether advice on low carbohydrate diets and Mediterranean diets, for example, is effective to prevent weight increase after weight loss.

For someone who is an investigative reporter there is a staggering amount of poor reasoning and a lack of fact checking here.

Its time for the zombie fact about the Swedish Low-Carb guidelines to be put back in its grave for good, and Nina can start that process with a retraction of what is clearly misinformation.

In response to comments from Jacques Rousseau on twitter (do read his excellent blog post here) Nina Teicholz’s claims:

Firstly on the issue of policy, Health Technology assessments are authored by the independent Swedish SBU and the reports produced:

…could, for example, be an important source of information for other decision-making authorities, such as the National Board of Health and Welfare, the Medical Products Agency and the Dental and Pharmaceutical Benefits Agency. Professional associations of health care personnel, such as doctors, nurses and dentists, can use SBU reports as a basis in preparing their own guidelines. An SBU report can also be used at an individual health centre or clinic to provide guidance on the possible benefits for patients of introducing, prioritising or, in some cases, excluding methods.

Note the use of the words could, and can. The purpose of a HTA is to act as an independent guide to decision making. Yes the recommendations can be adopted within separate guidelines (or used to devolve decision making all the way down to individual doctors and nurses) but it is not and never will be a Government Policy. If Sweden had translated the HTA into guidelines rejecting the LF diet, where are they?

This are, of course moot points, because Nina Teicholz totally misrepresents the content of the report.

The idea that the authors were biased to keep in line with established wisdom is laughable – I mean just read the report itself, each decision was graded based upon specific evidence presented by the SBU and the evidence for LCHF was simply lacking, or absent in many area. If you don’t believe me feel free to read a translated summary here.

Faced with this refusal to amend her false claim I issued a simple challenge which would take no more than 10 minutes on google:

..and further offered to set the record straight if I am wrong:

After a number of requests Nina Teicholz simply blocked me on twitter.